Disclosure:
The content below is aimed to share my experience of building the backbone of a reinforcement learning model during the Cybera DataScience Fellowship with HockeyAI. It is not intended to offer a detailed explanation of Markov Decission Processes. Snippets and plots displayed in this blog post belong to HockeyAI. This post was written upon approval of Elliott Sheen from HockeyAI.

In the Cybera Data Science Fellowship, I worked with HockeyAI (Actionable Insight) to build a recommender system for student-athletes using ML and AI. We were interested in answering the following question: What is the best possible career path for a student-athlete interested in playing in the professional hockey leagues in North America?

For example, imagine you are 14 years old, and you are currently playing in the under-15 (U15) league. Since you are interested in playing in the professional hockey leagues, reaching the AHL or the NHL is paramount in your career. Because the best possible career path depends on your age, geographical location, performance in previous seasons, among other factors, our interest is to build a recommender system that optimizes your career path to help you reach the professional hockey leagues.

In the following sections, I offer some details of the approach we followed, some points to consider to build our RL model with a bit of the theory behind it, possible next steps, and my deliverables during the fellowship. 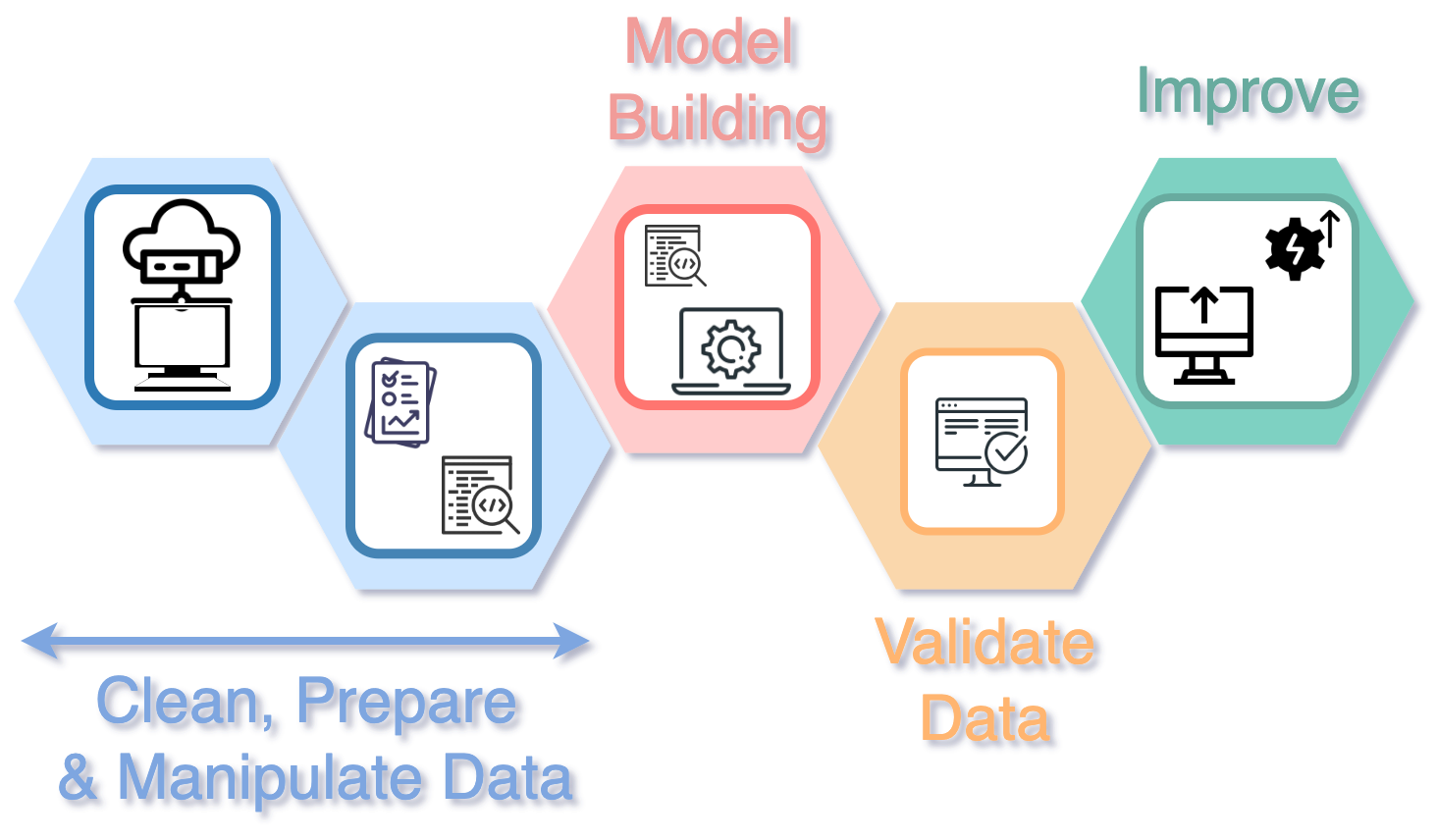 In this project, we followed the Agile methodology in combination with a standard Data Science workflow, as shown in the figure above. Since this was a remote position, we also used Docker to deploy the JupyterLab containers in a private cloud. In this way we guarantee all the members of the team work in the same virtual environment. Given the timeline of our project, my work was focused on the first two steps: data cleaning and model building.

For model building, I opted for a Reinforcement Learning (RL) approach. In contrast to unsupervised learning models, RL aims to maximize the reward of the agent instead of finding similarities and differences between data points. I opted for this model considering two main aspects: first, the ability of RL models to optimize rewards, and second, because our goal with HockeyAI is to optimize rewards of student-athletes to reach professional hockey leagues.

In Markov Decision Processes (MDP) there is an agent who interacts with an environment. The environment, in return, provides rewards. Based on this reward, the agent changes its state, and therefore new decisions taken by the agent will be influenced by the environment.

The following diagram summarizes a MDP applicable to Hockey AI: 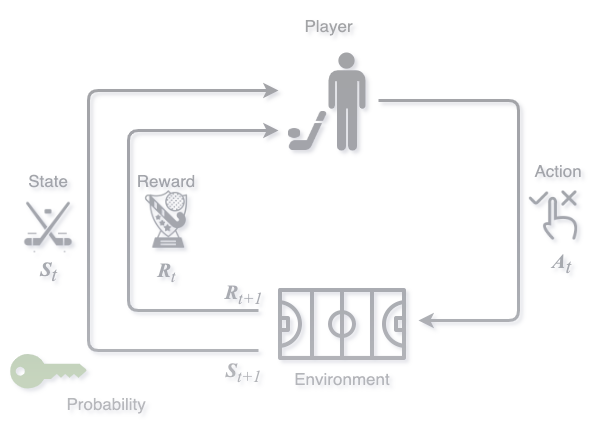 Player
The player (Agent) interacts with the environment by actions (𝐴), and receives rewards based on them. At each step (𝑡), the player executes an action, 𝐴𝑡.

State
The state of the player at a specific t in a given environment (𝑆𝑡). When the player executes an action, the environment gives the agent a reward, and a new state for the agent is set (𝑆𝑡+1).

Reward
Reward is the numerical value that the player receives when executing an action at a given state(s) and in a given environment. The values are assigned according to the actions of the agent.

Since two of the most important elements in our model is the transition probability and the reward function, I am going to offer a more detailed explanation for each one of them.

To calculate the transition probability, we first need to order the historical data. In this way, we guarantee that the calculated probability corresponds to the transition between previous_league and next_league. We obtained an extended dataset from the of historical data for players that satisfy the following conditions: Active players in seasons 2015-2016 to 2019-2020; Players whose team was affiliated to a league in NorthAmerica; Players with minimum year of birth 1970.

Our data contains the transitions between the league n and the league n+1 for players that satisfy the conditions above. For the initial model, I kept three features in a new DataFrame: AgeInSeason,league_Level, and leagueName.

Using this data, we then proceed to calculate the transition probability matrix between two league levels, even if they are not consecutive. For this, I wrote a class called TransitionMatrix that allows us to calculate the probability of a player to move from one league to another.

Since individuals results are not meaningful, we have to calculate all the transition from all the retrieved players using the historical data. To store all the probabilities, we create a dictionary with keys as all the possible pairs between leagues (even if they make no sense at all!) and then calculate the cumulative probability with the cumulate_probabilities function.

Then, we can plot the obtained probability with the plot_probabilities function. 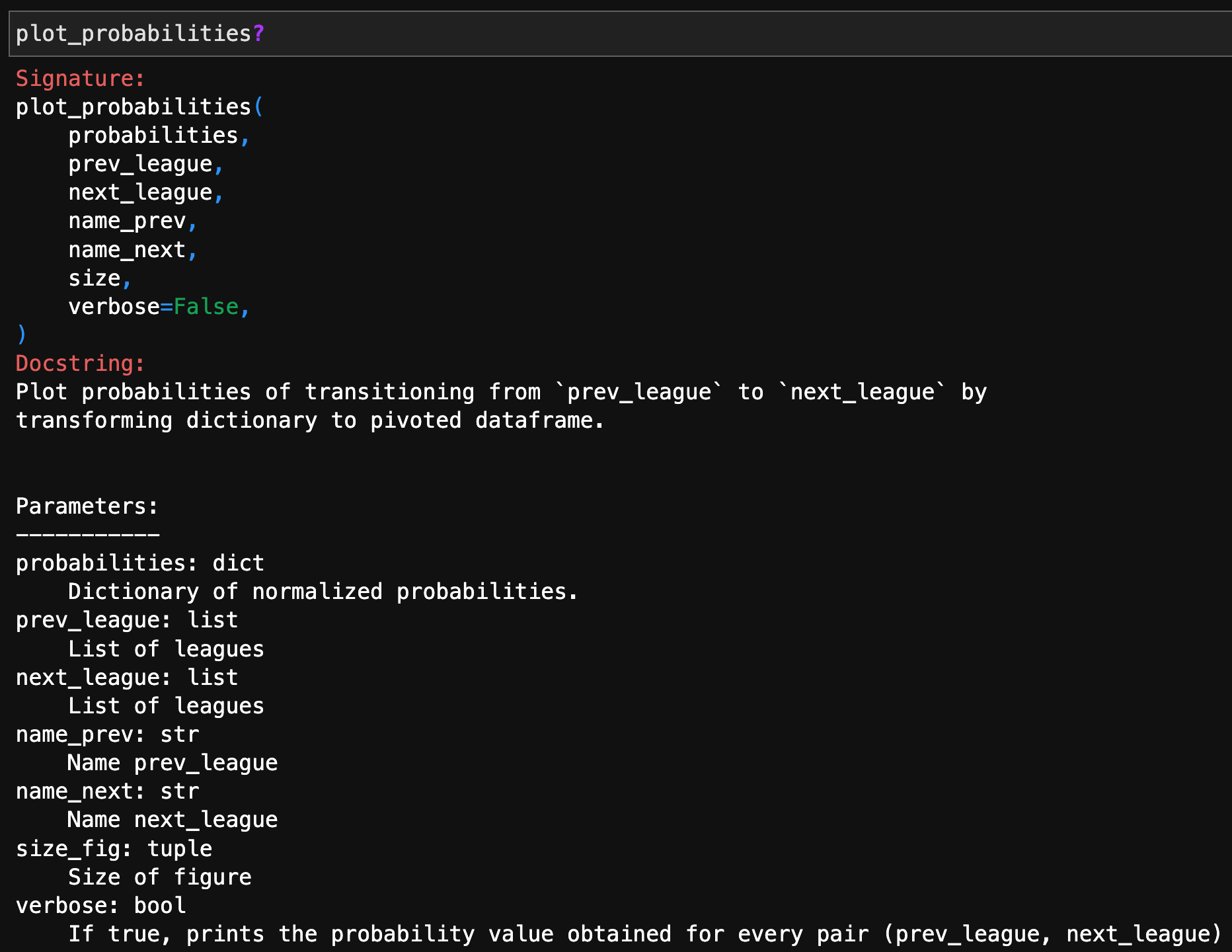 For example, this is the obtained probability matrix for the transition between the college and the professional hockey leagues based on the selected players:

For our reward function, we considered the following ranking for league levels: 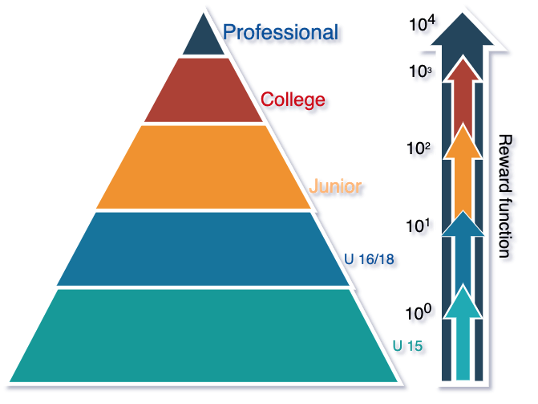 I proposed to calculate an exponential reward when transitioning to an upper league, with a penalty if the league is in the bottom of the list, among the possible leagues in that level. The ranking of the leagues by level goes according to the ordered lists: 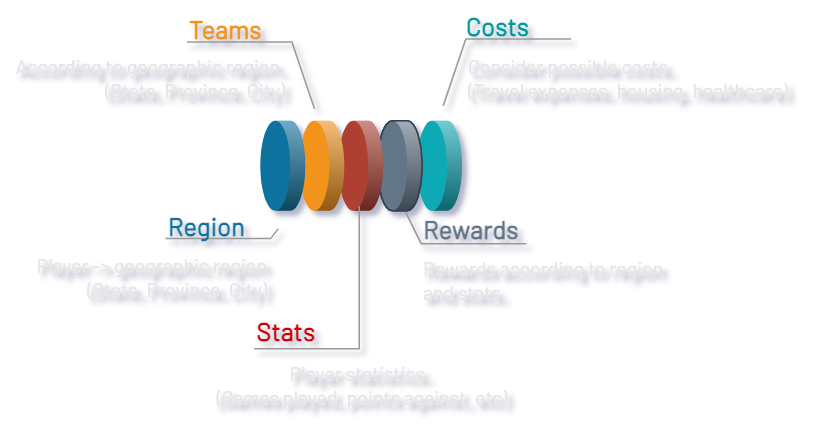 My deliverables during the Cybera Data Science Fellowship can be classified in three main groups: data processing, model building, and documentation.

Data Processing
To process the data extracted from the EliteProspects API, I wrote the CleanerBase.py class and the RetrieveData.py script that automates data retrieval and optimize data cleaning by splitting, dropping, and assigning keywords to obtain a simplified DataFrame.

Model Building
During the development of the model, I wrote the ComputeTransition.py class that calculates transitions between states given a Markov stochastic decission process by determining frequencies of events to then compute probabilities of the transition between hockey leagues. This class also includes a transition matrix object that derives the stochastic matrix of a Markov chain, to help in computing probabilities. I also delivered the RewardsFunction.py script that calculates the exponential reward function for every transition to an upper league.

Documentation
All the development was documented in four separate jupyter notebooks, identified by the assigned Agile story name. The content included in the notebook include a detailed explanation and a step-by-step description of the inital Exploratory Data Analysis (EDA), model building, and the results obtained with their respective data visualization in form of static heatmaps. 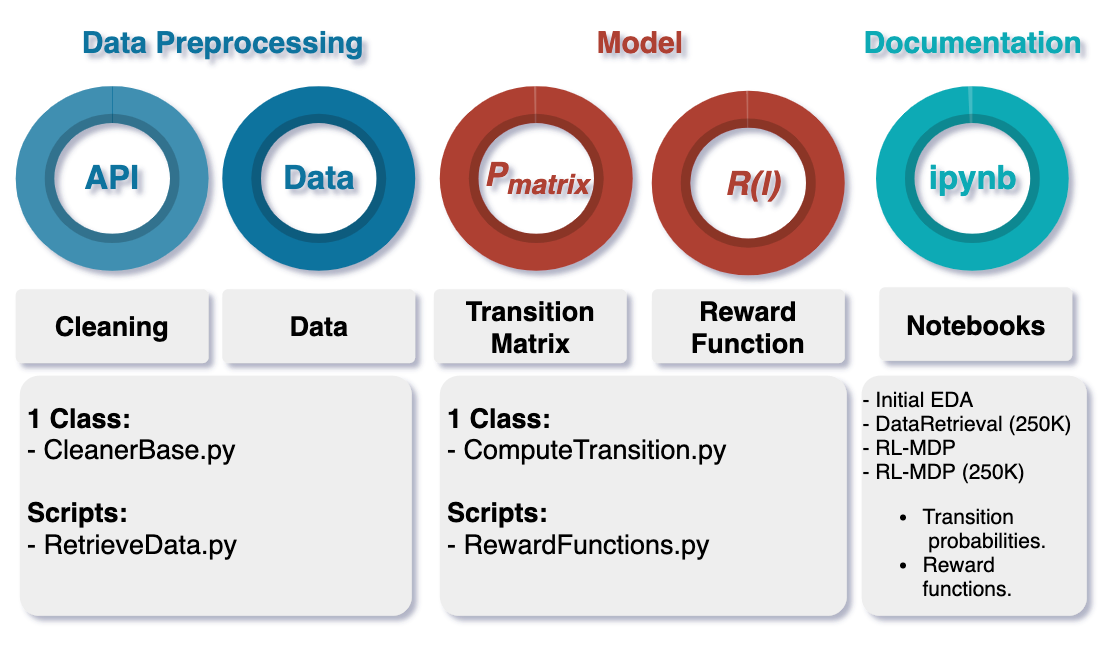 The Cybera fellowship was a very interesting and challenging experience. It offered an opportunity to work in a Data Science team to solve real-life problems.